Long-time readers will know that I have a small collection of Anime and videogame figures, which is a very fancy term for glorified toys. I’ve written about them numerous times over the years. Because these figures are predominantly female characters, my friends have often (jokingly?) referred to them as my “dollies”. This doesn’t really embarrass me; in fact, I’m quite proud of one particular acquisition (just don’t ask me what it cost). I continue to display a number of them prominently in my room, and if I had more space, I’d probably have them all out, along with my Godzillas and other nerd toys.

I realized today, however, that it’s been a very long time since I made a new acquisition. Almost two years by my math, which – keep in mind – I’m very bad at. My last purchase arrived in late January of 2011! It’s almost hard to believe!

To be honest though, the last few years have marked a shift away from many of pastimes I used to hold so dear, including (but not limited to) Anime. I remember spending hours watching and thinking and writing about Anime and Manga when I was in high school and junior college, while simultaneously investing hundreds of dollars into the comic books, DVDs, and merchandise that went along with that lifestyle. My interest and affection, unfortunately, have waned as time went on, to the point that I’m currently downsizing and selling my collection of Manga and Anime DVDs on eBay. The same could be said for videogames: outside of a few phone apps and indie PC games, I haven’t really touched my consoles much except to play Netflix or DVDs. I still have a love for the medium, but my interest in new releases is currently close to zero.

This ultimately means that as I look through the list of upcoming or recent figure releases, I don’t really see much that grabs my interest. I don’t know any of the characters anymore, and I’ve never even heard of they’re shows. Sure, I might be able to find them on Netflix, but what’s the point? I have enough fond memories of shows like The Melancholy of Haruhi Suzumiya, Gurren Lagann, FLCL, Cowboy Bebop, and Rurouni Kenshin to sustain me for years to come. Plus, I can always re-experience them with the comics and DVDs that I am keeping.

To my surprise, though, I can say that I found a new figure to buy. Good Smile Co. (which, incidentally, is the only figure company I ever buy from) just so happens to be making an Iron Man figure, set to be released in February 2013. Since I’m still (as of this writing) a nerdy fan of superhero movies, pre-ordering the miniaturized Tony Stark was a no-brainer. Iron Man will be a fitting addition to my desk at work, although I’m concerned that he may fight with Godzilla. 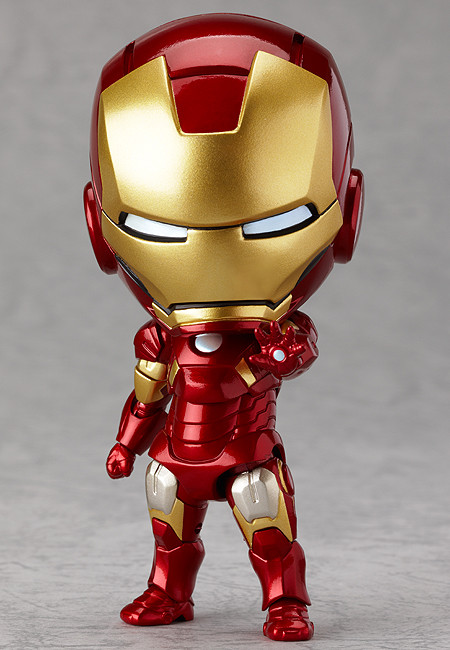