It may not have made my official list of resolutions, but one of my smaller goals for 2013 is to be more frugal with my gadget purchases and to get the most out of the ones I already have. In other words: stop buying new crap and use the devices I own already.

I was just writing awhile ago about shopping for a new tablet, and since then I’ve been wavering about which one would be the best fit. Do I really want the 10-inch Nexus tablet, or would I be happier with the smaller Nexus 7? Meanwhile, I have a perfectly good Kindle Fire that has been sitting unloved in a drawer since I bought my Kindle Paperwhite (which, again, I definitely could have lived without). Although I have my problems with the Kindle Fire’s hardware, its biggest issue is software: I constantly wish that I had access to the same suite of apps available for my smartphone. That’s one of the reasons a Nexus 7 tablet has been so appealing.

But since I don’t really have the disposable income for a new tablet right now, I did some research (and a few hours of tinkering) and accomplished the next best thing: I turned my Kindle Fire into a Nexus 7. I call this Frankenstein’s monster of technology “the Nexus Fire“. 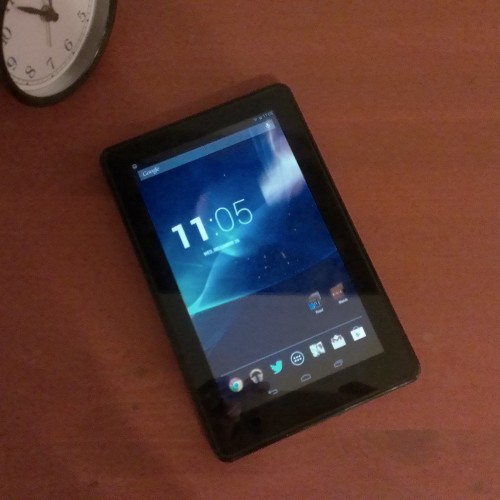 I’ve been using the revamped Kindle for about a month, and I’m pretty satisfied with the results. It still has some of the Kindle Fire’s quirks (like annoying volume control) along with some new ones caused by the transformation, but the software upgrade more than makes up for these shortcomings.

I may reconsider upgrading to a Nexus 7 should Google decide to update the tablet in the coming months. The Nexus Fire, however, should satisfy my needs in the meantime.