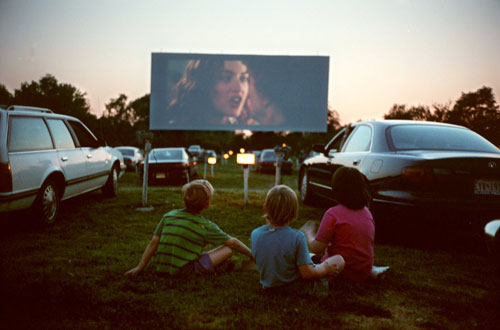 Unless you’re a really big fan of the beach, Summertime is all about one thing: blockbuster movies!

My girlfriend and I are both big movie watchers, so obviously we’ve been spending lots of time at the local multiplex. And why not? There is a metric ton’s worth of good movies either out already or coming soon this season. I came into the Summer dying to see movies like Iron Man 2, The A-Team, Prince of Persia, and Toy Story 3. With Summer half-over, I’ve still got a handful high-priority movies to see, such as The Sorceror’s Apprentice and Scott Pilgrim vs. the World. With movie prices on the rise, this is hardly a wallet-friendly habit.

Thankfully, I live really close to a drive-in movie theater, which offers a double-feature for less than the average traditional theater ticket. I had actually forgotten about the drive-in, to be honest. It was my girlfriend who pointed it out one evening while we wear returning home from yet another dance excursion. She told me that she had never been to a drive-in movie, which I immediately said must be rectified. We set a date, and a few days later were seated in our car ready for a Prince of Persia/Toy Story 3 double-header.

Both movies, by the way, were very enjoyable, although Pixar’s latest was particularly excellent (I swear they get better with each film). But what made them even better was the drive-in experience.

Have any of you ever been to a drive-in movie? If not, you should do yourself a favor a go sometime. As movie theater experiences go, it’s pretty hard to beat. Aside from the price-per-movie ratio (which is pretty sweet), there is one thing I love most about seeing drive-in movies: bringing your own food.

Buying food at a regular theater sucks! It’s not hard to spend more than the price of admission on food. And sneaking in food isn’t that much better: although you get better selection and pricing, there’s always the fear of getting caught. At the drive-in, however, bringing your own food is almost expected. When we went, my girlfriend and I literally brought our dinner; we had some salad, a bowl of grapes, some Chinese food, and whatever drinks we wanted. We probably could have even brought some wine if we wanted to.

Besides this, it’s also nice to (1) be able to talk over the movie whenever you want, and (2) have complete control over the volume. I hate when movies can’t decide whether they want to be loud or quiet. “Sorry, you just blew out my eardrums with that explosion. Could you repeat those whispers a little louder?”

All told, the two of us had a blast the other night, and we’re planning to make the drive-in a regular fixture of our week. And with all the movies coming down the pike, we certainly won’t be without something to see.