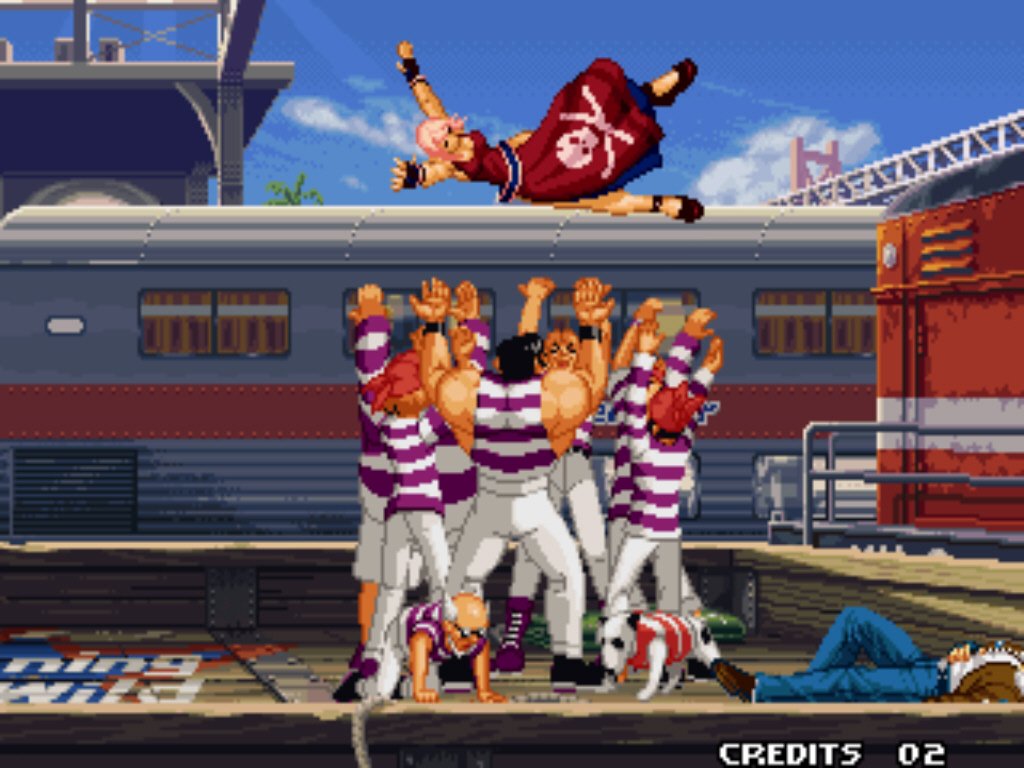 I’ve sung the praises of King of Fighters XI before, but today I feel that King of 2D Fighting Games, in my estimation, has been dethroned by my recent adventure into the library of SNK. What game could possibly accomplish this feat? Why, none other 1999’s Garou: Mark of the Wolves.

About a month ago, I noticed that a version of the old Dreamcast game was soon to be available of the PS2 in Japan via Play-Asia, and having heard that it was one of the best 2D fighting games around, I figured for $30 I could hardly go wrong with importing it. Besides, it featured my favorite character from KoFXI, B. Jenet, which was practically enough to seal the deal. So last Wednesday the game arrived in the mail and I quickly booted up the disc for a quick play session after work.

My impressions during that initial play session were less than favorable compared to KoFXI, mainly because I could no longer control characters via the analog stick, as I am wont to do after a year of playing the aforesaid game. Being forced to use the d-pad presented a bit of a learning curve at first, one which somewhat negated my familiarity with the controls and moveset of B. Jenet (who was my obvious choice when selecting a fighter in story mode). I found that I could hardly move beyond the first challenger without losing, which I suppose contributed to my negative first impressions. However, I resolves to overcome these difficulties given the overwhelming positive reception the game received from reviewers.

So this past weekend I invited my friend and fellow fighting game fan Hector over for a play session. We had previously enjoyed the likes of Super Smash Bros. Melee, Naruto Clash of Ninja, Soul Calibur 2, and (of course) King of Fighter XI. We popped the game in my PS2 and started playing, and it was then that I learned why Garou MotW is so highly praised in the fighting game community. Besides the excellent balance between fighters, the game is easy to play, challenging to master, and fun as hell. I say it’s easy to play because Hector, who had not yet learned of the “quarter turn,” was still able to best me at several rounds in the game. We discovered together the purpose of the TOP set bar, how to pull of specials (both light and strong types), adjusting the handicap to maximize play time, and just how catchy that old-school level select music is. The more we played, the better we each got, and though he lost more often than not, he was still holding his own and maintaining a relative status quo compared to my progress. I think if we make these play sessions a habit, we both could easily become fairly high-level players. I’ve already noticed marked improvement in my own skills (thanks in part to a mastery of the d-pad setup) when playing the single player mode. 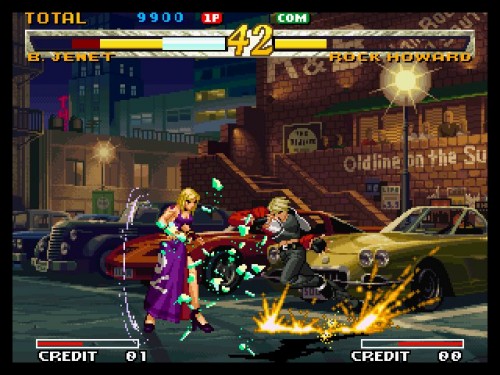 As much as I enjoy King of Fighters XI, I’ll readily admit that certain aspects of the design make it a bit complicated for a beginner, especially one who doesn’t own the game themselves (like my friend Hector). For starters, the 3-character team setup really hinders novice play. It take time to find a character that suits your play style and master their moveset, let alone three. It took me at least a month to finalize my standard team if KoF, and that was only after many play sessions and many team combinations. With Garou, Hector was able to cycle through the small cast of fighters and find one he found enjoyable, then proceeding to learn his moveset. The process was no more complicated than that, and in the end it helped keep the two of us on a fairly equal level of skill. Admittedly, the graphics and audio in Garou aren’t near as polished as in KoFXI, but they hardly detract from the experience. If I need to play something with some extra depth and style, I can play KoF, but if I’ve got a friend over and want a simpler experience, Garou MotW is definitely the way to go.

The one thing I’ve learned from playing these SNK fighting games though is that now I really require more depth from the controls in a fighting title. Whereas I used to thoroughly enjoy the simplicity of Naruto Clash of Ninja, I now find it to basic. They aren’t really a game of skill, but rather an exercise in button-mashing. There are no combos to speak of, and the lack of control depth is ultimately frustrating in the face of Garou or KoF or even other 3D fighters like Soul Calibur or Virtua Fighter. I’ve also learned that Fighting games are one of my favorite genre’s of video games (along with Rhythm, Action, and RPG). I hope it sees a revival in the near future, as aside from the big name franchises there aren’t many available on the US market currently.