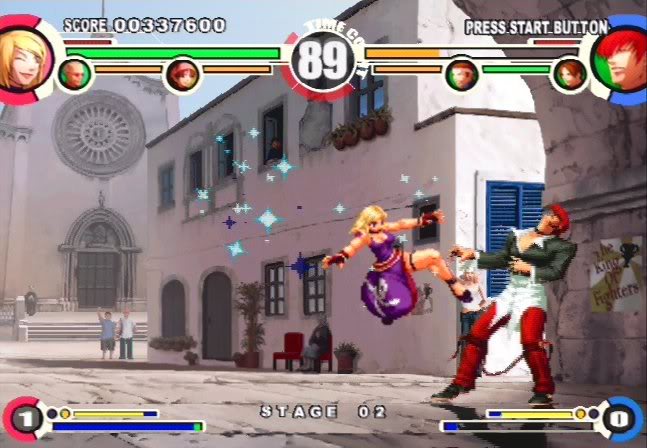 Five years ago, when I was still a fledgling member on the internet gaming community, the idea of importing games directly from Japan seemed like a practice reserved only for the hardest of hardcore gamers. At that time, I only knew one person who imported games, but he was a huge Bemani fan so it made sense for him. Maybe times were different back then, but as I got older the practice seemed to become more prevalent. By the time Nintendo released the original DS, websites like (the now defunct) Lik Sang had become common knowledge among gamers I knew. Still, the thought of importing a game was not one I considered often, what with the risks.

That, however, was before King of Fighters XI.

Gaming Blog Kotaku had just posted an article and interview with SNK character designer Falcoon about the future of the company and the King of Fighters series. Of course, I had heard of KoF, but being a child of Street Fighter 2 I never really paid much attention to SNK’s offering. Well, for whatever reason, the article prompted me to look into the series. The more I read, the more interested I became and the more I wanted to play a KoF title. Low and Behold, a couple months prior SNK Playmore had released a PS2 port of arcade hit King of Fighters XI. I considered waiting for an American release, but upon further investigation come to the conclusion that such a release was unlikely. That left only one option left: importing. At the time, I was understandably reticent:

The problem is, word has it that this most recent title is unlikely to reach American shores. If the last few games were any example, this will probably be true (KoF 2003 arrived here in 2005, I believe). With this in mind, I’m considering (seriously) importing these titles and modding my PS2 to play them (via Swap Magic). I’m still debating the whole issue, since right now the $100 endeavor (which includes the cost of the game) is essentially for a single fighting title. However, I should also consider that I don’t know what other games from Japan I’ll want down the road. Something like Ikaruga (Gamecube) probably shouldn’t have ever been released in the States, so who knows what other niche titles may come along. For now, my plan is to get the opinion of a couple other people, and then thoroughly think about the subject this weekend. If by Monday it still sounds like a good idea, I’ll do it.

And by Monday, the idea still sounded good, so I purchased the game and the necessary equipment. Six months later, I’ve never been happier with my decision. KoF XI turned out to be better than I could have ever hoped. The 2D graphics, while not as detailed or fluid as Guilty Gear, are still very attractive and have a very classic look in my opinion. The character roster is numerous and varied. Best of all tough, the fighting system is so finely-tuned that it’s difficult sometimes to play other fighting games. As enjoyable as something like the Naruto Clash of Ninja series is, the games lack the depth and require less skill than KoF, which makes them boring to play for extended periods.

SNK announced this past Fall that they’re working hard on King of Fighters XII, which among other things will include completely redrawn sprites (for the first time in ages). I don’t know about anyone else, but I’m really excited. At this moment, there is absolutely no information, screenshots, or release date for the title, but hopefully soon some info will come to light.

Until then, if you haven’t ever seen KoF in action, be sure to watch to YouTube video below and see what American gamers are missing out on.