I wrote a letter to my Senator today, and I urge you all to do the same, especially if you care at all about the factors that led up to the recent tragedy in Orlando.

I’m lucky to have representatives who shares my beliefs. One of my Senators – Dianne Feinstein – is a proven leader with regards to common sense gun regulations. In the wake of the Orlando shootings, she proposed an amendment barring the sale of guns and explosives to known or suspected terrorists. She also helped lead the fight to pass the 1994 Assault Weapons Ban.

I have not always had strong feelings with regards to gun control; in fact, I’d say most of my life I’ve been fairly ambivalent. I grew up in a town where the attitudes regarding guns were fairly relaxed. And my family never owned any guns ourselves, which helped keep me on the sidelines despite my surroundings. Even during the rise of mass shooting – starting with Columbine when I was in middle school – I maintained a laissez-faire attitude towards firearms; however, the events of the past year give me great cause for concern regarding the types of firearms available and the ease at which someone can purchase what is essentially a weapon of mass destruction.

And so inspired by people like Hannah Hart and Hank Green, I wrote a letter to Senator Feinstein urging her to continue her support and further requesting that she work in Congress for the following:

So I ask you all again: please write your own letters. Look up your Senators and Representative and their office addresses. Find out where they stand on the issues you care about, whether it’s gun regulations, LGBT issues, the economy, infrastructure, law enforcement, whatever. Tell them who you are and what you’re passionate about and what you’d like them to do about it. Be polite. Write it out by hand, so they know you care enough to spend extra time. Then fold your letter, place it in an envelope, stick a stamp on it, and mail it to them. If you don’t have any stamps, go buy some. It’s a small price to pay to let your voice be heard by the very people who can effect change. 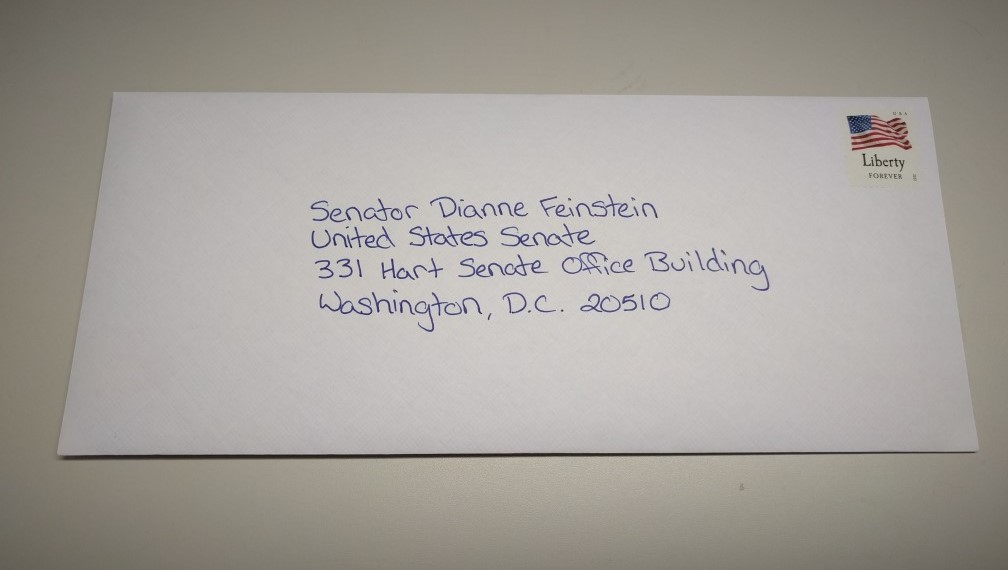