One of my favorite Internet personalities – Retronaut in Chief, Jeremy Parish – posted a really great blog awhile back about how it’s okay for nerds to dress well. It’s a really good read (as is most of his writing), and really underscores a “problem” in our larger geek community. Let’s face it: most of the time, we dress like we just don’t give a damn.

This was an epiphany I came to myself over the last couple of years, instigated in part because of my entry into the dance scene. That was really the turning point. I spent three years working for the State, and during my tenure there I never did anything but loath “dress clothes”. They always felt stifling, the pants never fit s’s well as jeans, and seemed to lack the inherent personality that you find in a cool screened t-shirt. To a certain extent, I gave up wearing dress slacks entirely, strolling in each day in a pair of Levi’s and hoping my boss wouldn’t notice and/or care.

Such lax attitudes about personal grooming and appearance are pretty uncommon in the dance scene though. Swing dancers in particular seem to love getting dressed up for night out with their friends and significants, and if you’re slumming it at the same venue in jeans and a t-shirt, you really feel out of place. I used to cringe at come of the pictures I’d see on Facebook after a night of dancing: my friends would be impeccably clad in crisp button-ups, vests, and colorful (but not garish) ties, and there I’d be next to them, wearing jeans and an ill-fitting cotton shirt off some variety or another. I felt really embarrassed, to be honest, although I was likely the only one who ever cared.

Eventually I reached a point in my dance career where I started competing, and anything short business casual attire was not an option. But by that point, I found I didn’t mind the extra effort. I was now buying clothes that – much to my amazement – actually fit me, and people were taking note. My boss, my friends, and more importantly girls were all commenting on my new-found sense of style, which was no longer limited to slightly baggy jeans and witty cotton tees. This had the added bonus of drastically increasing my supply of office attire, a definite advantage when I was barely employed as a substitute teacher and didn’t really have the funds to spend on a new wardrobe.

Now here I am in my mid-twenties, and my attitudes about clothing have completely flipped from early college days. Once, I tried to make my everyday attire suffice for cubicle life; now my business casual clothes are my everyday attire. My collection of nerdy t-shirts has slowly dwindled to a mere handful, replaced by a staple of solids, plaid, and even gingham. I’ve discovered an affinity for ties and especially blazers heretofore unknown. I look forward to Winter now (once my least favorite season) just so I can wear my peacoat and collection of scarves. And with any luck, I may soon count a nice herringbone vest among my most treasured possessions. 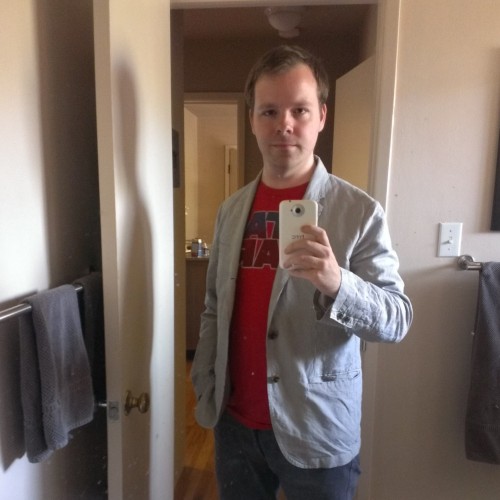 That’s right, Interwebs! I’m not above taking a selfie!!

Look at that! Two years ago I didn’t even know what herringbone was!

But listen, my fellow geeks: I totally get it. Clothes, especially nice ones, are expensive, and it’s certainly much cheaper and easier just buy some Levi’s at JCPenney and a couple nerdy shirts at Hot Topic. I’ve been there. And obviously there are plenty of things you’d rather spend your money on. The Jeff of ten years ago sunk a small fortune into hobbies like anime and videogames, wearing whatever clothes were within reach. But while it’s tempting to maintain this attitude indefinitely, I’m learning that there are tangible benefits modifying this outlook.

So nerds, I guess what I’m saying is this: it’s okay to put in a little work into your appearance. If you decide to wear a t-shirt, at least make sure it fits your body type. Maybe even class it up a bit with a blazer (one of my new favorite looks). It’s not much, but you may be surprised by the response. 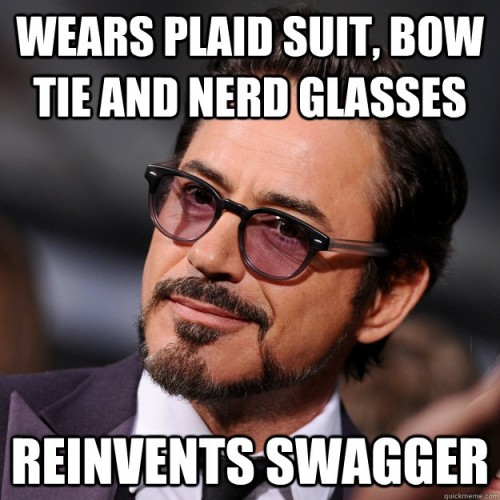