Outside of Twitter, I don’t think I’ve written about George RR Martin’s Game of Thrones series (also known as A Song of Ice and Fire by those who’ve read the books). It was almost a year ago that I cracked open the first tome – because the books in this series can only be described as such – and was transported to the world of Westeros, captivated by all the magic, adventure, and political machinations therein. Eventually I did investigate the popular television series, but I remain a much bigger fan of the source material. It is my way.

So it goes without saying that when I heard there was an official Game of Thrones beer, my interest was piqued. I soon learned that said beer was not only a Belgian white (my favorite style) but also crafted by Ommegang, a NY-based brewery I discovered during my last trip to the Empire State. I knew then that I must possess – and subsequently partake – this almost impossibly delicious-sounding libation… and thankfully I had partner in crime willing to do the leg work.

My coworker Jess is also a huge Game of Thrones fan, although she’s only watched the HBO series. She’s also incredibly tenacious and not as easily discouraged as yours truly. Whereas I performed a cursory internet search for local retailers found that none of them had any bottle in stock, and quickly gave up the notion, Jess began an hour-long game of phone tag with every BevMo, Total Wine, and Whole Foods in the region. After many fruitless inquiries, she finally found a Whole Foods in Roseville that said they might – MIGHT – have a case in stock at their distribution center, and that it would be a couple days before they’d receive this possibly mythical beer. Jess – possessing what may very well be her own brand of Asshai magic – managed to persuade the clerk to reserve two bottles for us should this case of beer prove real.

It was. Two days and $10 later, I had my beer and was ready to bask in its glory. 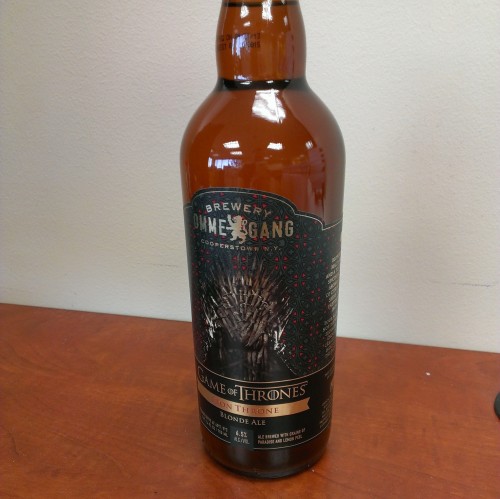 Overall, it was a very good beer, and definitely worth the extra effort. Jess grilled me the next day, asking if I thought it was the best beer I’d ever had. I can’t really say that, but then, I’m not really sure what I’d say what beer I would give that title, except that I know I’ve had a beer that was better. I do, however, hope that Ommegang and HBO team up again to produce more ale in this mold. Might I suggest the next brew be called The Imp?