It’s true what they say: you never forget how to ride a bicycle!

My girlfriend somehow convinced me to take a bike ride with her this weekend, and I phrase it that way because I honestly didn’t know if I could still ride one. I, like many people, learned to ride a bicycle when I was a young kid, but I was also never very enthusiastic about the activity. Occasionally I’d pull my bike out of the garage and ride it around the neighborhood. I don’t think I ever really rode it with purpose though; I was never trying to get anywhere. I certainly never rode it to school, although I was certainly within a short enough distance. That’s probably for the best though; those kids always tended to be pretty dorky, and I had enough problems in middle/high school.

So, needless to say, I was a little worried about being forced onto a bicycle and expected to propel myself across town, all without falling on my ass or running into people, cars, or buildings. To my surprise, I was actually pretty competent. I was a little wobbly at times, and stopping quickly wasn’t really my strength, but I did manage to avoid injuring myself and others.

Better yet, I dramatically shorten my travel time while getting some pretty awesome exercise. 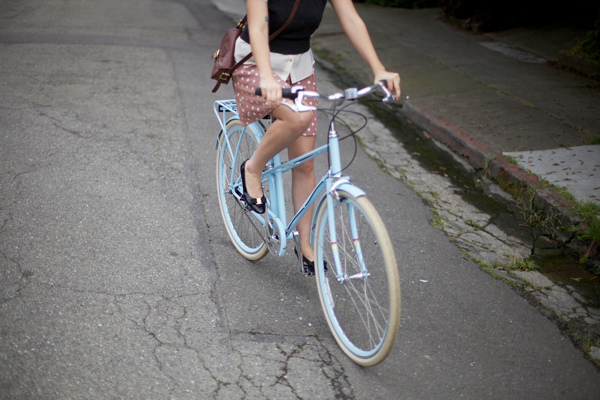 Living in Midtown Sacramento means that a lot of things are pretty close by, relatively speaking. I can walk to coffee shops, restaurants, groceries stores, and even a Target all on foot; it isn’t, however, very convenient to do that sometimes. A round-trip to the grocery store can take over an hour, which means it’s often just easier to drive. If I invest in a bicycle of my own though, perhaps I could split the difference. And besides, the weather is going to be perfect in the next month or so.