Last month, I was in my very first car accident.

If I had been better blogger when it happened, I probably would have made a post or two about the whole incident and subsequent events. In short though, my car was rear-ended at a traffic signal. It was very low speed accident – thankfully – so I didn’t suffer any lasting injuries. My car Sheila, however, wasn’t so lucky.

To a casual observer, the damage incurred didn’t seem very severe: a torn bumper, crunched trunk lid, and a broken tail light. The insurance company weren’t quite as optimistic. They said my car was totalled: that the cost to repair the damage would be more than the car was worth. The company would give us money regardless of whether we repaired my car or bought another one, but they strongly suggested the latter.

When I heard the news, I was pretty devastated. Sheila was my very first car, bought a year after I got my license. She wasn’t new, but we bought her from the original owner and she was still in really good condition. But what mattered wasn’t so much the condition of the car – I didn’t need a new car at 19 – what mattered was that this car was mine. So I named her Sheila – after the tank – because I knew this humble 2001 Mitsubishi Galant was going to be with me for the years to come.

And thanks to the people at Dick’s Body Shop, Sheila will be with me for many more years.

I could hardly believe it when I saw her on Tuesday. Sheila wasn’t just fixed, she looked better than the day my mom and I bought her. After almost two months, the ordeal was finally over. And better still, the body shop actually did all the repairs for less than the insurance company gave us, so now I have a little extra pocket money.

I think I’ll spend it on something nice for Sheila. After all, she’s been through a lot lately. 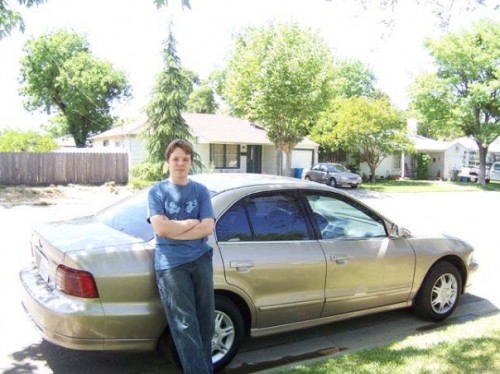 That’s me with Sheila, just shortly after we bought her.