My friend Lisa was in town last night, which under normal circumstances wouldn’t be that big of a deal. In less than two weeks though, she’ll be leaving for a semester of study in Australia, which means that I’m gonna have to cherish any time we get to hang out before then. So the two of us headed to Brew It Up (a local watering hole) for some dinner and drinks. We ended up staying for nearly three hours, not because we were getting trashed but because we happened to stumble in for trivia night. 90s trivia to be precise.

We didn’t win, but with 30 out of 40 correct answers, I feel we did pretty well for ourselves, especially since it was just the two of us. Most tables had six or more people! This brain of mine appears to have a reservoir of 90s trivia inside that is nigh-untapped, and last night I basically opened the floodgates. I was easily able to call forth knowledge like which Friends alum starred in the craptastic Lost in Space movie (Matt LeBlanc aka Joey), as well as name the MTV dating show featuring Jenny McCarthy (Singled Out). I can only assume that some combination of growing up in the 90s and watching lots of VH1 is to blame.

On a somewhat related note, I saw Lost in Space in theaters! Even as a kid I knew it was terrible.

The night wasn’t a total lose though. I did walk away with a couple of “fabulous” prizes thanks to some bonus questions: I won two free passes to see Sex and the City 2 and – if that weren’t enough – a complete season of Will & Grace as well. I think if I were a gay man I might be more enthused by these prizes. As of this moment, I’m just trying to be rid of them as soon as possible. 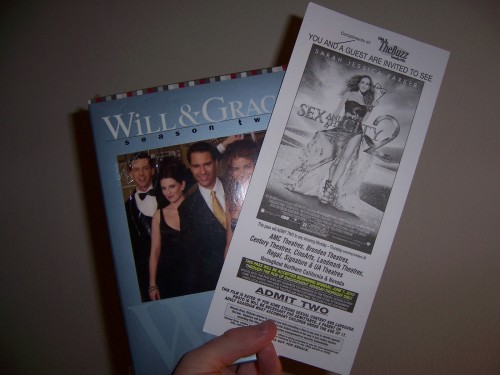 Could these prizes get any better? *sigh*

However, all good things must come to an end, and so too did the evening with my best friend. Between the margaritas, the pizza, and the trivia-related hi-jinks, it was an awesome night. When she returns in December, we’ll definitely need to go back.